How to Find the Right Influencer For Your Business 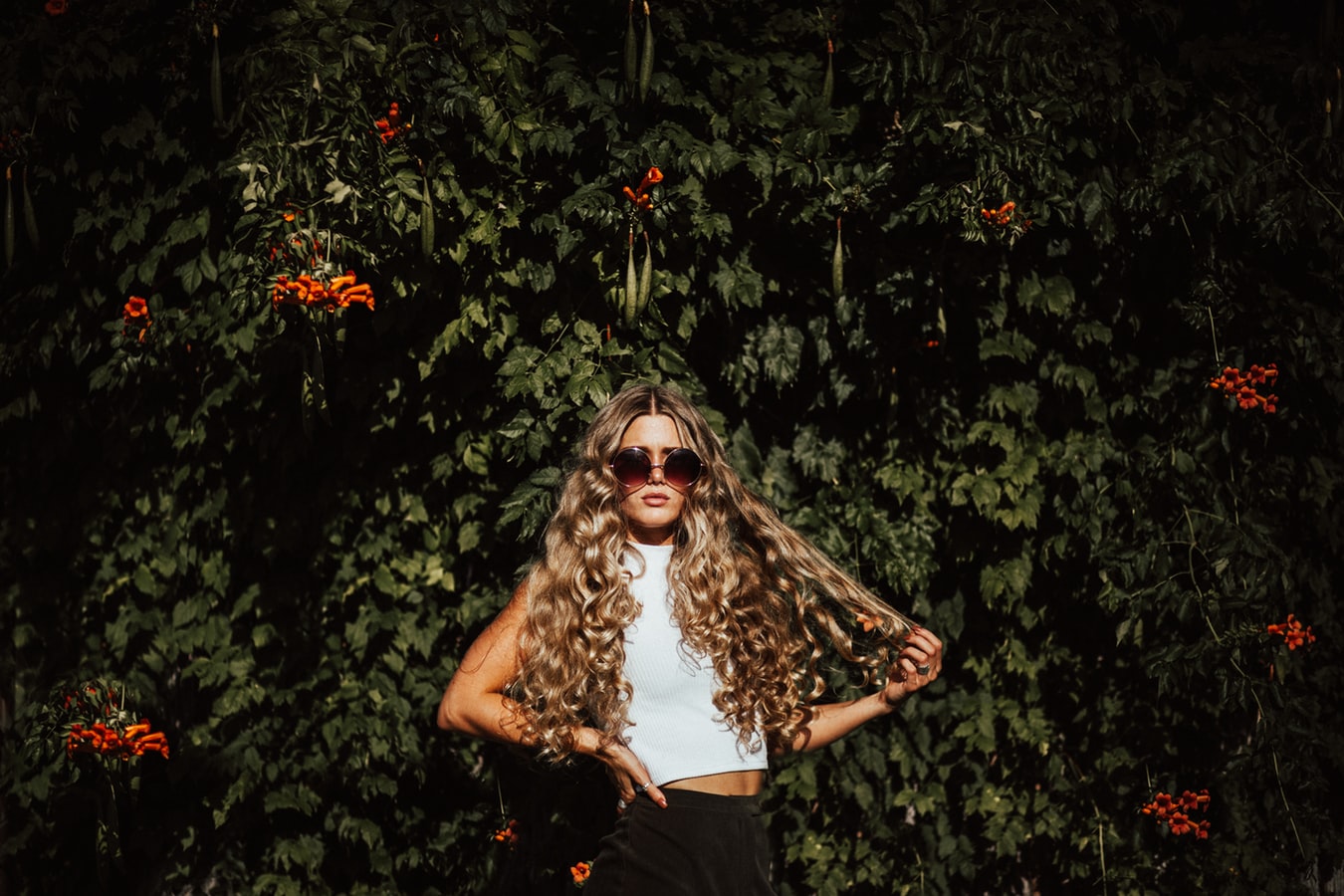 Finding the Right Influencer post is part 2 of a series of posts. If you missed the first in the series, please find it here, The Marketing Leaders Guide to Influencer Marketing. If you’d like to see the next part in the series, just click here, How to Get the Most Out of Influencers at Your B2B Event.

Matching The Company’s Identity To the Influencer

In an ideal world, your chosen influencer(s) completely align to your company’s value and mission.

Thus, when selecting which influencer, you should possess a firm grasp of both the company’s identity and the potential influencer’s beliefs.

There are two ways to mess up the pairing of a business and influencer:

Be extra careful when selecting people to choose prospective influencers, they need to have a firm grasp of the company vision and mission.

A warning from the B2C world: in addressing its core audience—families and children—Disney often touts honesty as one of its core business principles.

Nevertheless, the company failed to live up to this standard when marketing “Frozen 2” in Japan.

They orchestrated a number of well-known cartoonists to endorse the movie on their social media accounts, but failed to disclose the transaction.  Unfortunately, the execution of this campaign, demonstrated a lack of knowledge or commitment to the principle of honesty.

When twitter users brought the apparent concerted social media posts to light, Disney was forced to issue an apologetic statement clarifying these were paid influencers, not personal recommendations.

This proved to be embarrassing faux pas, which was picked up in the press, and resulting in a PR stumble for Disney. 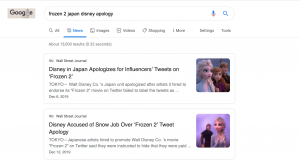 Google and the Google logo are registered trademarks of Google LLC, used with permission.

Make Sure You Know Who Your Influencer Is

The next step is correctly identifying whether the people on your shortlist truly embody the message of your brand.

Logan Paul is a fantastic, if cringeworthy, example of this. A few years after his online debut, Logan was approached by Youtube to star in one of their series, Foursome, and a movie, Thinning: New World Order.

At the time, it seemed sensible enough.

Youtube was targeting pre-teens and young-adults and this was exactly the age range Logan was resoundingly popular with; however, they made an enormous misjudgement in his character and maturity.

In December 2017, Logan posted an incredibly controversial video detailing a suicide forest in Japan. Within hours, it had gone viral and every brand associated with him became toxic, including Youtube.

As brands rushed to abdicate their relationship with him, Logan was forced to apologize, but remained mired in controversy and ill-repute long afterwards.

In this case study, the marketing team that decided to offer him the business partnership was correct in their audience analysis and his relevance to them, but they failed to accurately assess the risks involved. Even a modest review of his videos would have revealed his recklessness and that he was a PR nuclear bomb waiting to go off. Furthermore, there are dozens of top-tier stars on Youtube that could have checked the box for their target audience, but produce much cleaner content.

All in all, they did superficial research with the hope it would all work out. It didn’t. 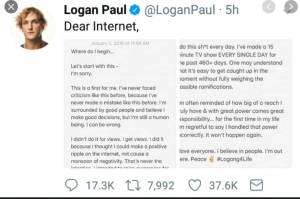 It’s an unfortunate fact of reality that the size of your budget will (at least to some degree) determine who you’re able to hire to endorse you. Of course, there is always the rare situation when Bono or Sting volunteers to support something for free, but those are almost always reserved for charities, and whether Bono or Sting would truly add credibility to a B2B brand is certainly not a given.

If you have a sizable budget, you not only have an unquestionable larger array of possible representatives, but you qualify for a far wider panorama of medium options to market your company (i.e., instead of a single Instagram post, have a full Facebook video, in person activation, etc).

Nevertheless, this situation is also accompanied by a dilemma — how much should you pay and for what?

As is natural to budding disciplines, there is little consensus on how much influencers should be paid per promotional act and the scene is quite fluid; however, we can still use certain case studies to approximate.

On one side of the price spectrum, we have some of the most famous celebrities in the world: actors, models, and moguls, people whose faces alone garner millions of unique digital hits.

A great example of this is Kendall Jenner who, in 2017, received a mouth-watering $250,000 dollar payment for publishing a single Instagram post promoting Fyre Festival (1).

Not bad for one minute of work.

Luckily, your company probably won’t need to take such extraordinary measures to achieve their marketing goals.

On the other side of the spectrum, we have up-and-coming influencers that, for one reason or another, have drawn eyes to their online lifestyle and developed a grassroots movement around them. These are online personalities, wannabe comedians, content creators, etc, that have become semi-famous through viral videos such Cameron Dallas, Zach King, Baby Ariel, etc. There are also leaders in different industries that gain traction as influencers, such as Dave Gerhardt, Ann Handley, and Jay Acunzo to name a few.

As these influencers are starting out and aiming to climb the mountain of recognizability, they will be far cheaper to hire (though their followers will also be smaller compared to the elites). For an average price of a few hundred dollars, you should be able to request shoutouts and product endorsements across a wide swath of social media accounts.

There is also something of a third kind of influencer-categorized as individuals who perhaps don’t think of themselves as influencers or seek to actively promote their personal brand-but through either talent, creating hi-quality content, etc have gained a following online (social media, blog, podcast, etc).

While the size of a budget is obviously beneficial, there are advantages to the alternative. For example,  spending massive amounts of money doesn’t guarantee a commensurate ROI. Those working with smaller budgets therefore have a much lesser chance of wasting resources.

Additionally, in cases where massive budgets are allocated to hire very famous influencers and these marketing campaigns fail, the resulting fallout is proportionally much larger whereas a lesser known figure would result considerably less PR damage. 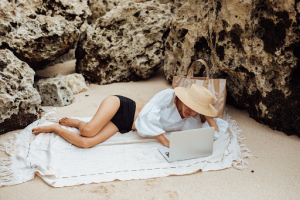 Avenues to Find Your Influencer:

As the list below indicates, there are multiple ways to locate a potential representative for your company.

As basic as it is, online resources are a great way to research your space in-depth and find the right candidate. Venture into industry discussion forums and write down any names you see come up frequently, sift through social media while trying to discern which follower counts look authentic, and keep a list of potential hirees’ track records. Remember, finding the right influencer is only half the battle. It is imperative to anticipate any possible PR incidents in the future so as to avoid them.

Talent agencies continue to evolve and their next iteration is facilitating negotiations between marketers and influencers. If you’re wondering how it’s possible to contact actual celebrities, you’re going to have to go through the right people, i.e., agencies.

In the example of Kendall Jenner above, when Fyre Festival sought to hire her for their social media promotional campaign, they reached out to her modeling agency—Elite Model Management—to get in touch and negotiate the deal.

Of course, in most cases, this is an extreme move. The vast majority of potential influencers you will be most likely to work with, most probably have direct contact information on a website over via LinkedIn.

This is the rarest route to recruitment due to its exclusive nature and, while it’s true you either have an “in” with the right influencer or you don’t, most people give up on this option before even trying.

Reaching out to your social circle and diligently networking go far and, oftentimes, the degree of separation between someone you’re close to and a well known figure is far slimmer than you’d suspect.

The good news with this avenue is that if you do manage to happen upon the right connection, you can almost always negotiate a better than average deal compared to industry standards making the ROI calculation much better.

Another less known way to discover hidden influencer gems in your industry is through your event app.

Attending conferences has become standard fair for most professionals, as has their reliance on a personalized app for connecting and interacting while present at the event.

What many don’t realize is that the trending feed in event apps is the perfect place to discover unknown, but highly genuine, micro-influencers within your target audience. Many times, these people are self-taught experts, enthusiasts, or activists with wide recognition and support from the larger community, but aren’t familiar to companies because they haven’t sought to market themselves monetarily.

There are numerous benefits to connecting with these types of influencers. First, since they are so active in your community, they’re likely already aligned to your business/products and have bought into its vision. What’s more, their following in the community is genuine and, therefore, very strong. Consumers are much more likely to trust them than some random celebrity they don’t know on a personal level.

To identify them, over the course of the conference, make a note to sift through all trending activity and watch for patterns:

Once you’ve narrowed down the potential influencers, you should approach them with genuine interest in the field, thoughtful questions on current events, and how your company might be able to add value to consumers within it.

Remember, these individuals aren’t famous by choice. Their skill or accomplishments in the field are driven by passion for it, not money. So, don’t make the mistake of offending them by appearing ignorant of the industry or leading with monetary offers as you’ll only lose their respect.

This influencer marketing post is part 2 of a series of posts. If you’d like to see the next part in the series, just click here, How to Get the Most Out of Influencers at Your B2B Event.

Want to see what SpotMe can do for you?

Book a complete overview of SpotMe, the B2B event marketing platform with the tools & production to build amazing customer relationships.